Cain and Abel and the Stages of Spirituality

So, I’m a student of the Psychology of Religion.

Scholars have done studies on the developmental stages of faith—meaning there ARE stages of faith from less mature to more mature. Early stages rely on an external authority. They are very rules-based and about doing things “right” according to the authority and the rules. There is usually an innocence or naïveté because folks don’t know better, they can’t be more progressive yet, and they absolutely want to be “saved". 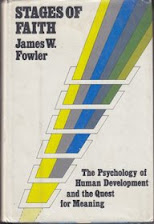 The hardest shift is between level 3 and level 4 spirituality (according to James Fowler) when a person shifts from an external authority to an internal authority, and from a head-based religion to a heart-based religion. (Richard Rohr simplifies it as early life—stages 1, 2, 3—and later life—stages 4 and up.) The people around them who are still in a rules- and authority-based religion are particularly threatened by their shift and do not understand it. I liken it to learning to swim. People who have not learned to swim cling to the side of the pool and call out in fear at their loved ones who are starting to let go and swim in the water.
(Does this information help in understanding the ways people do religion that can be so different?)
If you are raised by people who are in stage 4 or higher level of spiritual development, you still have to go through your own stages, but everything about the way they live encourages you to move into a thoughtful, heart-based approach to life. But if you are raised by people who are “clinging to the side of the pool” in an authoritative “you will only be safe if you stick with us” religion, it is much much harder to take the next developmental step into heart-wisdom, because most of the people around you are screaming that you are going to “die”. They don't want you to notice all the people that you’re finding who are living from their hearts and yet are not "dead". 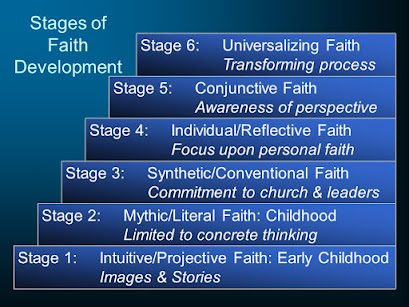 This theory has helped me a lot in understanding why people do religion the way they do. Levels five and higher in spiritual development don’t even look like “religion”, because they are so respectful of the individual spiritual journey. They tend to be empowering, not controlling.
How is this connected to Cain and Abel? (Genesis 4)
My childhood tradition's teachings say that Cain represents “the need to be right” and Abel represents “being loving from deep wisdom.” They are brothers because they are ways of doing religion. Cain is born first (early spirituality) and Abel second (later life spirituality). Cain resents and does not understand why God favors Abel (the more mature and genuine spirituality). Cain is threatened by Abel and wants God's favor too, not understanding the shifts he still has to make in his motivations and perspective. And threatened, Cain “kills” Abel thinking that that is the way to win God's attention and favor (someone clearly isn't reading the manual). Cain-energy in life will always kill Abel-energy. Judgy, controlling, need-to-be-perfect-and-right ways of doing religion (or politics) will always attack and criticize and invalidate loving, inclusive, service-focused ways of doing religion (and politics). It’s just the way people are. There's a foundational shift that needs to happen from "I've got mine, screw you" to "We are all in this together; if you are suffering, we are all suffering". 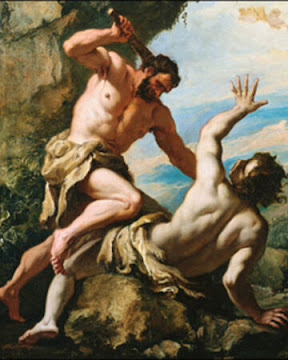 We all have a tendency to be drawn into the need to be right and "win" arguments. We value a sense of cognitive security and don't like perspectives that threaten our foundational narrative of how life (God, "salvation") works. Arguing with someone about how they are wrong is rarely effective because they are so emotionally invested in "staying alive" (maintaining the reality they have known and trusted until this point).
If you don't know how to swim, moving into deep water means death.
Questioning religious dogma is moving into deep water. It is essential that we learn to swim so as to be much freer and to realize how life-giving swimming can be. But everything in Cain-level development screams "death!" unless you are surrounded by loving swimmers encouraging you to try swimming.
The same way you can't teach a child to read until they have reached reading readiness, you can't force a lower level spiritual seeker to be ready to think for themselves until they are ready AND feel safe enough to try. Some birds are pushed from the nest, some fly with sufficient encouragement, but some have parents telling them that flying equals death.
So just love everybody to bits.

Try not to judge because people are (possibly stuck) where they are for good reason.
Learn to draw firm boundaries with those who want to push their beliefs on you (spiritual violation) even as you stop trying to push your beliefs onto others (still a spiritual violation, no matter how "right" you are).
This is my distillation of theology and psychology. It is not to be used as a club to force others to agree. Just a balm and guide for those who need a helpful perspective.
For more scholarship on the stages of faith you might start here:
https://www.institute4learning.com/2020/06/12/the-stages-of-faith-according-to-james-w-fowler/
For counseling and empowerment on your spiritual journey, you may contact me here:
https://pastoralison.com/
I do talk therapy as well as weddings.
Posted by Alison Longstaff Moore at 1:08 PM